Every Monday, John Hussman publishes incredibly robust market commentary.  He has become increasingly bearish as the equity rally we’ve seen since March 2009 steams forward.  His latest market commentary Investment, Speculation, Valuation, and Tinker Bell is no exception.  What sets Dr. Hussman apart from most market pundits is the amount of data and analysis he brings to the table – it’s often times overwhelming and probably too much for your weekend investor to get through.

In his latest commentary he provides an interesting quote from Buffett:

Warren Buffett was correct about profits as a share of GDP in November 1999 (and it would be useful if he remembered today how correct he was): “In my opinion, you have to be wildly optimistic to believe that corporate profits as a percent of GDP can, for any sustained period, hold much above 6%… Maybe you’d like to argue a different case. Fair enough. But give me your assumptions. The Tinker Bell approach – clap if you believe – just won’t cut it.”

This quote caught my eye.  Using the incredibly handy FRED database excel plug-in, I decided to test this statement.  Below is a chart depicting Corporate Profits After Tax as a percentage of Nominal GDP.  Buffett was dead on with his 6% remark – since 1947 this measurement has averaged 6.1% through 2011.  In the chart below I assumed corporate profit growth of 5% for 2012 (I’m not sure what that number actually was but this is a quick and dirty analysis).  The result: corporate profits are extremely elevated compared to GDP, 2.3 standard deviations above the average if you use my 5% assumption for 2012, 2.2 standard deviations if you just look at 2011 as the latest.  Ironically it was right around 1999, when Buffett made that statement, that corporate profits as a % of GDP bottomed out and began their sustained run above 6%.

Although I don’t have the data, I searched for “Corporate Profit Margins” and found many charts that looked like the one below.  The embedded Grantham quote is just icing on the cake, if you can read it (I didn’t actually notice it until I pasted it into this post, score). 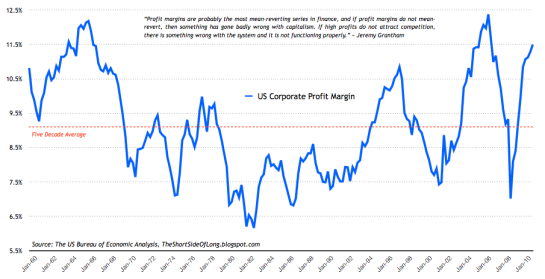 Some have pontificated that higher profit margins are the result of broader international activity among corporations and are here to stay – Hussman, who has done is homework, has found no convincing evidence of that.  In an earlier commentary he points out that “Elevated corporate profits can be directly traced to the massive government deficit and depressed household savings that we presently observe… one will not be permanent without the other being permanent… any normalization in the sum of government and household savings is likely to be associated with a remarkably deep decline in corporate earnings“

SO – what gives?  Probably corporate profit margins but WHEN that happens is anyone’s guess.

…and that is your contrarian view of the markets, thanks for joining.

P.S. Hussman’s commentary from the week before addresses the subject of corporate profit margins in much greater detail, including a version of the chart I so cleverly put together.  Unfortunately I read his posts in reverse chronological order.  For a much deeper dive on the subject read his Two Myths and a Legend post.